One hundred eighty-four years ago, Texas declared its independence. That same week, men, women, and children drew a line in the sand at the Alamo and fought to the death for liberty – not knowing the result would be victory.

Today, we celebrate Texas Independence Day, and we commemorate their sacrifice for liberty by offering our own.

Last week, over 100 Gun Owners of America activists—men, women, and children—traveled to Austin to testify in favor of gun rights. From Laredo, Orange, Dallas, Midland, and Minneola we showed up in droves and our voice was heard.

We are incredibly thankful for the sacrifices made, the miles driven, and the hours of time donated to secure Second Amendment freedoms in Texas. We outnumbered the gun-grabbing left at least ten to one, and they were heard complaining about our presence.

We must not rest now. We cannot know the eventual outcome, and we do not know the level of sacrifice it will take to win. But we know liberty is worth defending. 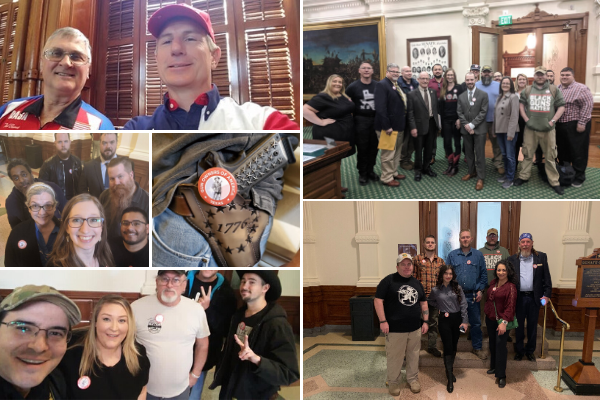 Although last week’s hearing was a rousing success for gun rights, our elected officials are still considering gun control. Please take advantage of three upcoming opportunities for you to voice your opposition to the proposed infringements.

Find a day and time that works for you, bring a friend (or five), and loudly proclaim your support for our right to bear arms. ?

Wondering why you didn’t hear anything about our presence on the news?  The mainstream media rush to the gun control hearings like sharks to blood. But they didn’t bother to show up when a record number of rational, well-spoken, diverse witnesses testified in favor of Constitutional Carry and ending gun-free zones.

We don’t fit their stereotype, and they hate our message.

Don’t let the media blackout win! Let everyone know that GOA activists dominated the scene. Share independent media articles such as this one: “Citizens Show Up at Senate Second Amendment Hearing.”

Draw your line in the sand today and join us in the fight.