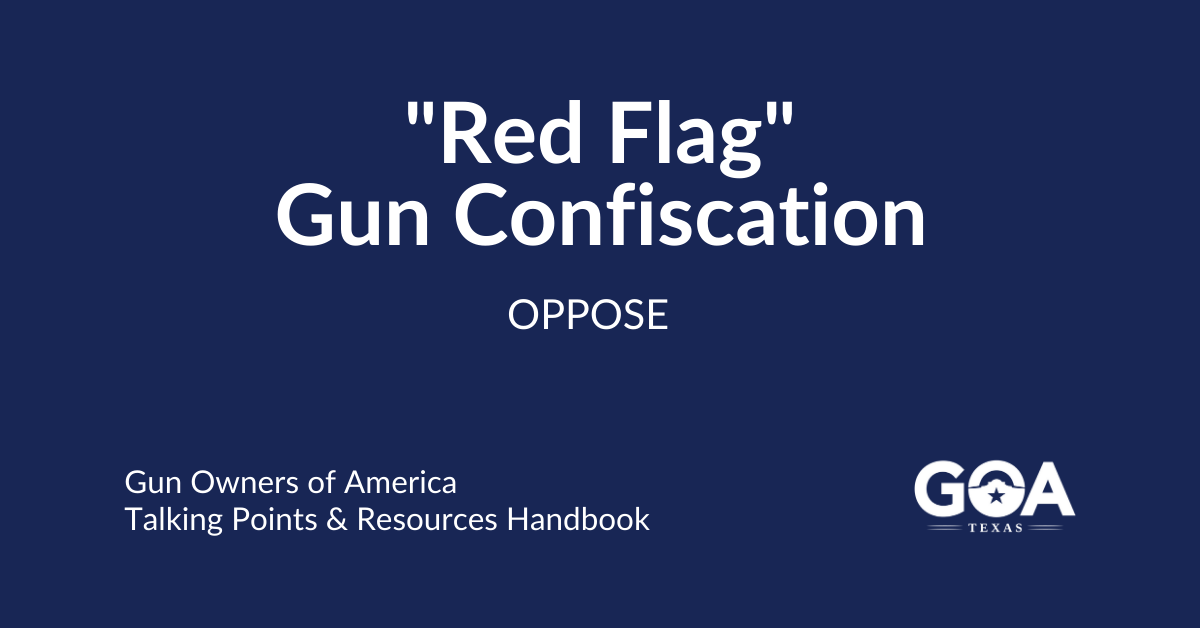 Government must not terminate gun rights based on “thought crime.”

Existing Texas law provides a variety of potential judicial orders intended to restrain dangerous actors from violent or harmful behavior. These include Magistrate’s Temporary Protective Orders, Family Violence Protective Orders, and Mental Health Commitments. These orders generally require a finding of criminal conduct such as domestic violence – or at least an allegation and evidence of a criminal act.

In the past several years, multiple other states have adopted a new type of order: the “red flag” law, also called an Extreme Risk Protective Order: (ERPO). These “red flag” gun confiscation orders provide for government to prohibit someone from owning guns before they have committed a crime, and without an allegation of a criminal act. A judge can slap on a “red flag” order and suspend a person’ s gun rights simply based on someone’s allegations that the person has mental health issues, owns guns, and is a danger to herself or others.

In other words, a “red flag” law allows the government to take away your guns before you’ve committed a crime—on the basis of “thought crime.”

A “red flag” law has two poison pills. First, it lowers the threshold for removing a person’s gun rights. It allows someone’s guns to be removed without convicting or even charging them with any crime, and without proper and full adjudication of being mentally incompetent. Second, it removes procedural protections. Typically, “red flag” laws allow an ex parte hearing – which means a judge can issue a gun confiscation order against someone without that person being present or even knowing about the allegations. It also dispenses with traditional protections such as the right to have an attorney, cross-examine the accuser, and appeal.

Bills that simply make it easier for someone to accuse a gun owner of being dangerous are not actually “red flag” laws because they do not have a provision to allow the government to take away gun rights based on those accusations. The same goes for legislation that makes it easier for government to pull information on gun owners from social media or other sources for “threat assessment.” However, these bills would make it much easier to implement a “red flag” law.

Texans should not have to worry that their ability to legally possess a firearm could be taken away based on allegations that they may be a danger to themselves or others or that they are mentally unfit. The state cannot properly force a person to forfeit his or her gun rights unless the person has committed a violent crime and been duly convicted of that crime or has been properly adjudicated as mentally incompetent with full due process.

OPPOSE: HB 164 by Rep. Meza, HB 395 by Rep. Moody, & SB 110 by Sen. West would enact a full-fledged “red flag” law based on model legislation from the most egregious gun confiscation organizations, including everything described in the “General Discussion” section above.