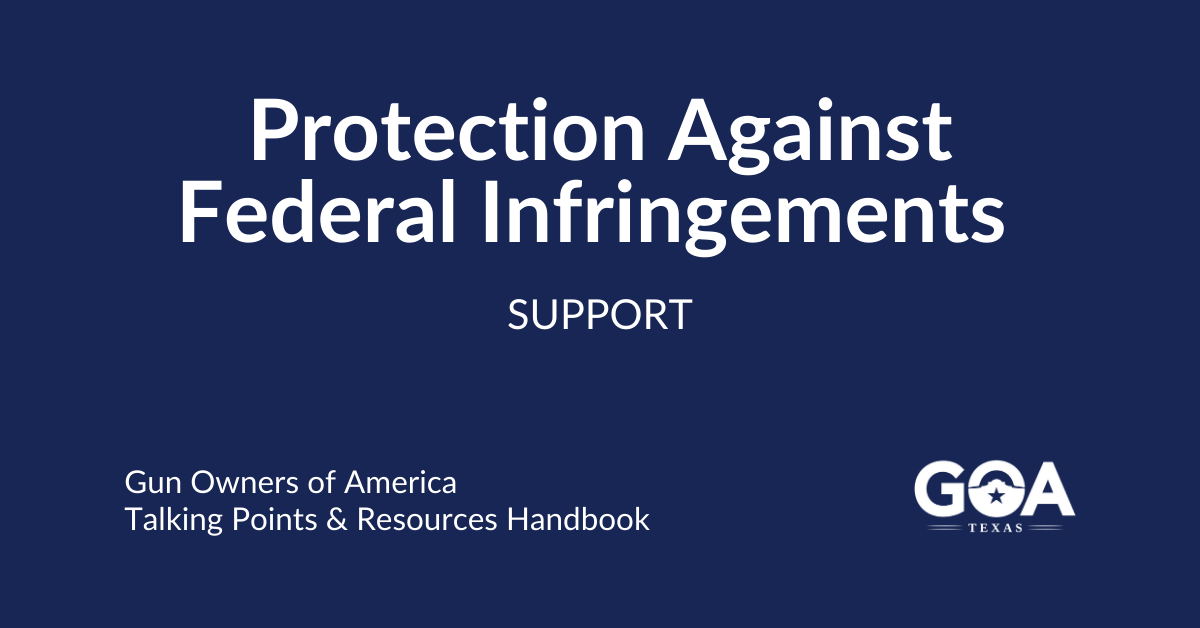 It’s no secret that the Federal government has been steadily eroding our ability to legally keep and bear arms through Congressional legislation, agency regulation, and executive overreach. Although Gun Owners of America fights back hard against these infringements and works to restore our liberties at the Federal level, GOA also supports states taking measures to push back against Federal infringement.

We acknowledge that many of these measures may face legal challenges, and we recognize that part of our battle for our rights must be fought in the courts. Our legal arm, Gun Owners Foundation, has supported litigation to protect our constitutional right to keep and bear arms for decades and will continue to do so.

Even with a favorable judicial decision, none of these laws can be counted on to fully protect our rights. Ultimately, no words on paper can give such protection. The Second Amendment itself states that “the right of the people to keep and bear arms shall not be infringed,” and yet that right still has been infringed throughout the history of our country.

Most Texas bills state that Texas will not participate in or enforce a particular category of Federal laws or rules, enacted within a certain timeframe and/or applying to a certain subject matter. Some legislation from other states allow state leadership to decide what constitutes an infringement. No bills give an individual gun owner executive power to declare that he is not legally obligated to follow a particular regulation.

So, it should be clear that the success of this type of legislation depends on application and enforcement. The battle for our rights does not end when we pass any of these bills. Still, we believe that these measures are a helpful and beneficial path to protecting our rights, and we strongly support passage of these bills.

These bills prohibit Texas from using its personnel or resources to enforce Federal gun-grab regulations.

SUPPORT: HB 112 by Rep. Toth & SB 513 by Sen. Hall would prohibit state & local government entities from enforcing or adopting a policy allowing the enforcement of any Federal statute, rule, order, or regulation enacted on or after January 1, 2021 that regulates a firearm, accessory, or ammunition and does not exist in Texas law.

SUPPORT: HB 635 by Rep. Krause & SB 541 by Sen. Springer would prohibit state & local agencies and law enforcement from assisting Federal agencies or officials in enforcing any Federal statute, order, rule, or regulation on firearms, accessories, or ammunition that does not also exist in Texas law.

“Made in Texas” Legislation

SUPPORT: HB 915 by Rep. Krause & SB 542 by Sen. Springer would declare that firearms and ammunition manufactured in Texas from Texas parts, and sold in Texas, are not subject to Federal regulations. A person who wishes to manufacture “Made in Texas” items can let the Texas Attorney General know his or her intentions, and then the AG must seek a declaratory judgment on the Constitutionality of this law.

SUPPORT: HB 336 by Rep. Cain & SB 548 by Sen. Springer would keep Texas out of any Federal Red Flag scheme and would prohibit any entity in this state from enforcing a “Red Flag” gun confiscation law not enacted by our state legislature.