Ken Paxton Continues to Stand for Your Rights

Make plans to vote for Ken Paxton in the primary runoff election. Please keep these dates in mind as you plan to vote: April 25th is the last day to register to vote, Early Voting is from May 16th-20th, and Election Day is May 24th! Learn more about voting in Texas above. 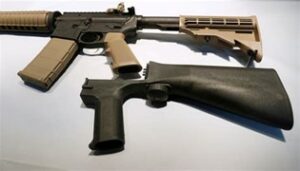 Gun owners in Texas know that Ken Paxton is a fighter for your right to keep and bear arms.

And he’s not backing down.

In his brief, he says:

The [Supreme Court should] also not defer to the ATF’s interpretation because it implicates the fundamental right to keep and bear arms. The [bump stock ban] effectively transforms commonly owned firearms into banned machineguns simply because of the use of nonmechanical bump stock accessories. This interpretation categorically expands the text of the criminal statute in a way that Congress couldn’t possibly have intended. And it expands criminal liability at the expense of Second Amendment rights, diminishing the latter absent a sufficient and compelling justification. When the ATF—or any agency— invades protected rights by interpreting statutes too broadly, this Court should step in.

This bump stock case lays the groundwork to fight current and future gun control. Should gun owners be victorious on bump stocks, it could set a precedent used to fight Biden’s recently announced homemade gun ban and other proposed gun control measures.

As gun owners will face at least two more years of an anti-gun White House, Texas gun owners need a fighter to stand in the gap for their rights.

Ken Paxton is fighting for your rights. He’s earned your vote for Attorney General.