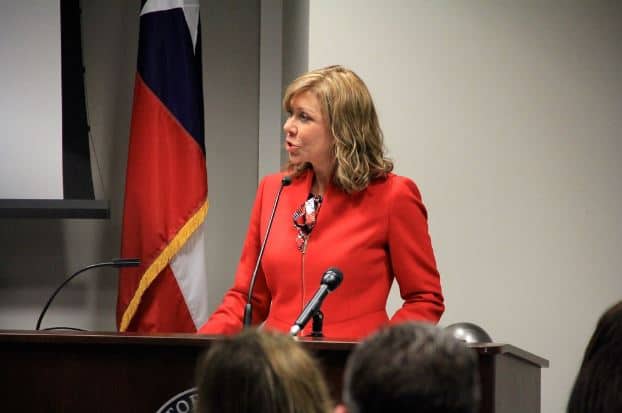 Please use GOA’s action center (below) to call Sen. Joan Huffman. We have also provided a sample script to make the call easier. (If you’re uncomfortable giving your phone number, please use your area code followed by 7 random digits.)

If fully passed in its current form, HB 1177 will allow anyone who is not prohibited from possessing a handgun to carry it, open or concealed, when evacuating from a disaster zone within 168 hours of a declared disaster.

Our biggest obstacle to advancing gun freedom right now is the Senate State Affairs Committee. Use the widget above to be connected with Sen. Joan Huffman’s office to let her know we NEED a hearing on gun rights bills!

During debate on HB 1177, Rep Stickland brought amendments that would have broadened the measure into a quasi-Constitutional Carry bill. This should be an easy policy decision for Texas — to follow in the steps of 17 states who allow full Constitutional Carry or 31 states that allow unlicensed open carry.

Instead, the amendments were shut down on points of order. (See the full play-by-play here.)

This continues leadership’s consistent shutting down the issue of Constitutional Carry and propagating gross mistruths about the issue and about gun rights activists (see my video on that topic).

However, we can still chalk down significant wins.

Yesterday’s debate marks the first time that permitless carry has been brought forward in the Texas legislature. The vote marks the first acceptance of a wider population (not an elite class) carrying a handgun without a license in public — albeit with a very limited scope (evacuation from disasters). And the bill passed by 105-37. Click here to see how your Representative voted.

Next, HB 1177 must pass Third Reading in the House. Then it goes to the Senate. And THAT is where we have a major problem.

Sen. Joan Huffman, chair of the Senate State Affairs committee, has been sitting on two gun rights bills. One is SB 506 by Sen. Creighton, the companion to HB 1177 (constitutional carry for disasters). The other is SB 2146 by Sen. Hall, which would allow LTC holders to carry concealed in public schools.

Both of these bills are important steps to reduce infringement Texas.

And both of them are being stalled out by one person: Sen. Joan Huffman.

I visited with Sen. Huffman’s office yesterday to let her clerk know our members are demanding a vote on these important bills. I did not receive an assurance that they plan to move forward.

In fact, they indicated they are reluctant to allow the Senate to discuss these bills.

Now she needs to hear from you.

Please call Sen. Huffman’s office immediately. They will be out for a long weekend for Easter, so please do not delay.

Respectfully and firmly tell them we must have a hearing on SB 506 and SB 2146 because they will keep Texas safer.

Unfortunately, even though the Senate prides itself on being the “conservative” body, the facts show otherwise when it comes to gun rights.

Time is of the essence as we are only a few short weeks away from important deadlines. These bills need hearings NOW.

Thank you for calling and turning up the heat so we can pull out every possible win for gun rights this session!